Put up a new (novel?) aerial. It is hooked up to the grabber as of 1920z today. So let's see about the results.

First, what was I doing and why?
A regular dipole requires a balun when used with coax-cable. There are a couple of options for a 1:1 balun. I stumble across one that was using a 1:1 isolation transformer. Clever in a way. Another aerial that makes use of a isolation transformer is the Rock-loop, which proved to be a great helper in my travel setups.
In my Rock-loop, I was running the radiator through a toroid to form the transformer's secondary coil.
The question is, would this work for a dipole too?

Let me show you how the attempt looks like... 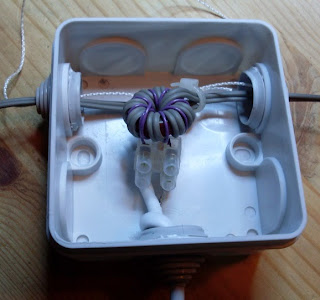 What you are seeing here is a T80-2 toroid, a dipole made from twin lead speaker cable (both leads in parallel) and some 75Ohms TV-coax.

I have to add that up to now, I just cut 14.5m of cable for the dipole. With 25cm used for the transformer, this corresponds to a 14.25m stretch. Here a velocity factor of 0.95 was taken into account. This still would be too long for several reasons, most importantly, a frequency of 10MHz, not 10.125MHz, is assumed.

In the Rock-loop, the transformer contributes to the loops inductance. In the example of the dipole, this will be the same. Such an inductance will further shorten a resonant dipole, this has not yet been taken into account yet. I guess, I will wait for warmer days and then use an antenna analyser and a pair of scissors.

All in all such an aerial should be relatively low noise, since it is isolated through the transformer.
The first observations over a span of about an hour are encouraging. I wonder if and how the aerial would, once resonated, perform in transmit.
Posted by Joachim Seibert at 9:35 PM