Having had the FT-736R inactive for sooooo looooong, it's time to think about putting together some aerials for space communications.

In the past I looked into the subject-matter before, but never actually found time and space to set things up. Thus faintly, my walnut recalled something called "The Eggbeater" and "The Eggbeater II", both, to me, are variants of the famous Turnstile. Some zick-zack thinking resulted in the decision to build an Eggbeater II for 70cm. Actually, I bought the material for the VHF version too.
If you are now puzzled what I am talking about, click here.
Here in Europe, we usually talk metric. The closest equivalent to #10 (AWG I assumed) copper wire I could find in my local hardware store was 6mm² copper wire.
The result, so far, can be seen in the image below. Bits and pieces still have to be assembled on a PVC pole. Before doing this, however, I first intend to test the aerial with both linear and RHC polarization. 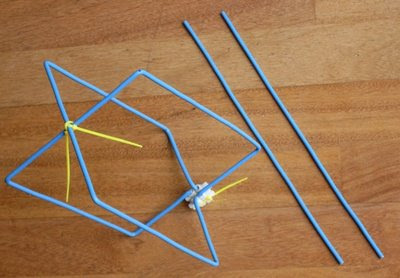 Posted by Joachim Seibert at 5:07 PM