Penning Down a Crystal

My previous post dealt with the fact that I needed a crystal which is non standard, but close enough to a mass produced crystal frequency, very close actually.

Years ago, I came across an old technique in which material is applied to a crystal in order to lower its' resonant frequency. When I remember correctly, that was done by attaching small patches of Scotch tape.
In more recent tests, done by a couple of radio experimenters, permanent ink was used to paint dots on the crystal to achieve the drop in resonance.

When I severely experimented with surplus crystals earlier in my life, the crystals' housings were soldered and could be opened by a medium powered iron. Today, housings seem to be welded and much harder to open. Well, it is not that hard after all.

This is what I do:
Using a high speed electric cutting tool, a groove is formed along the lower end of the housing. I do not recommend to use the tool to cut through the material however. The tool leaves a nicely roughened surface, at which a metal saw finds good grip. It is tempting, but do not hold the xtal at its' main housing, hold it at its' leads. Now carefully and slowly cut through the sheet metal by means of a manual saw.
This is how it looks just before the housing comes off: 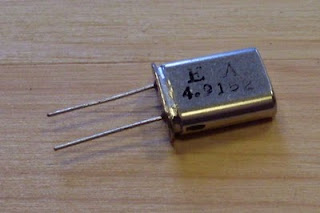 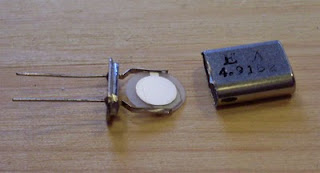 It is clear that this procedure does not create an all in all precise cut, but, that is not too bad. Having some edge features helps the later reassembly. In order to place the same rough edge in the same rough corner, I mark base and housing.

Now that the crystal is open, some oscillation device could be of use. Not really spectacular, this is what I came up with: 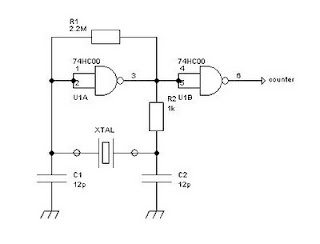 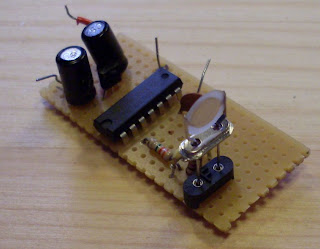 The photograph shows an additional 78L05...

What you see is the usual Pierce type gate oscillator. This is a relatively stable oscillator. However, it oscillates above the XTAL's series resonance. Sure, one could compensate with an inductor, but, for penning, grinding or matching crystals, relative measurement are usually acceptable.
Example: a crystal having a nominal series resonance frequency of 4.9152MHz should be penned down to 4.908MHz is a 7.2kHz drop. Assume the oscillator generates a 4.9170MHz signal, a 7.2kHz drop would read 4.9098MHz.
An additional consideration was, that many of my projects involve Pierce oscillators of exact that kind, hence, it would be reasonable to pull the crystal to the exact frequency it will operate later in the application.

I spare you photographs of a crystal wearing black paint...

And no, I did not start directly with my 4.908MHz project, I did some color burst tests first.

With the drop being not too far, i.e. not that much paint applied, one can actually observe the changes in frequency in the process of applying the paint. With a lot more paint applied, oscillation stops. When that happens, a funny effect could be observed: the oscillation starts again at higher harmonics and slowly drops to the fundamental frequency.
Example: the color burst crystal (3.579545MHz) with some paint applied stopped oscillating. When the counter came back to life it first showed (about) 28.48MHz, then 17.8, 14.24, 10.68, 7.12 and finally 3.56. This corresponds to the 7th, 4th, 3rd, 2nd and 1st overtones. The more paint needed to cure, the longer the oscillator remained at the individual frequencies...

OK, that was more like a fun side remark. The interesting bit is, I was able to obtain stable oscillation of a color burst crystal at 3.530MHz, which is a remarkable drop of 50kHz.

Finally, even a painted crystal deserves a proper housing: 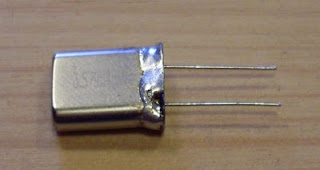 The penned down color burst crystal now ready for A1A action on the 80m band.
Posted by Joachim Seibert at 10:27 PM