Did some testing lately, in order to see which of the receivers has got the edge. This book: LF Today: A Guide to Success on 136 and 500kHz

indicates that the FRG-100 is seen as being as good as the TS-850. However, the TS-850 is attenuated from 500kHz upwards. The remarks in said book made me to buy a Yaesu FRG-100 some months ago. Prior to that I was able to ebay an AOR AR3030. The AR3030 gave good initial results on the Plumbtenna and the Octaplumb. But what a about a comparison?
In direct comparison the AR3030 gave a WSPR SNR 2dB above the FRG-100. So much to noise. But here comes some more.
In order to keep the receiver isolated from the soundcard, I was using a 1:1 audio transformer in the line. With good success on the Target HF3, which otherwise would have been totally useless.

When using the AR3030, I used the above mentioned cable with no further visible effects. A spectrum made at that time looked like that: 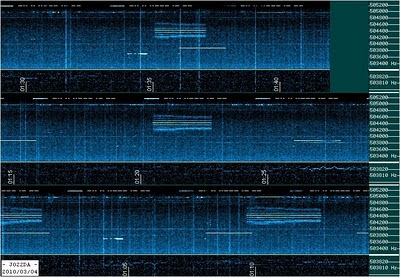 Some QRM, some WSPR, G3ZJO's MEPT, DI2AM, and some unknown signals. The SSB filter slightly kicks in on the upper range, but other than that, the spectrum looks quite "flat". Aerial at the time: Octaplumb.

And that's what the FRG-100 sees, (slightly different condx though) using the same aerial and audio cable: 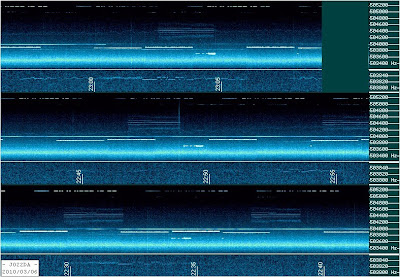 The SSB filter (still set to 2.4kHz b.w.) cuts somewhat deeper, ok, but what is that bright range at 1.1kHz audio frequency??? I lived with it for a while. BTW, G3ZJO's WSPR at 2300z decoded with a SNR of -19dB, the strongest yet. Other than that, the typical signals are shown... but again, what is that elevated band at 1.1kHz?
As I have seen that Jan PA9QV, also using a FRG-100 meanwhile, does not see anything similar to that, I started looking for culprits. My first guess was the correct one, finally some luck in life. The isolating audio cable, that worked so well with the HF3 did it. Having it replaced now with a regular one (which came with a computer screen once), the sound-card now receives this audio: 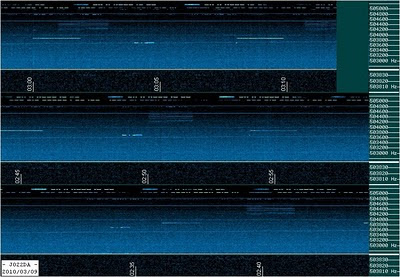 A flat response, as received from the AR3030 with the isolation cable. Hmmm, it appears to me, that the "rec out" of the FRG-100 comprises some capacitance that, in combination with the inductance of the audio transformer, leads to a 1.1kHz resonance. Maybe useful to know, but not useful for a wide-band grabber. I could consider making use of that effect when going narrow-band at 1.1kHz audio.
Additionally, but this is not linked to the 1.1kHz issue, I widened the FRG-100's i.f.-filter to 6kHz.

BTW, the condx at time of that reception was very favorable in a NE direction. For the first time I received Radio Rud SK6RUD at 0233z.
Posted by Joachim Seibert at 11:31 AM