That was a good one... at todays radio flea market I was hunting for 600m marine transmitters or life boat emergency stations. No luck it seems. The one thing that came the closest to what those things would look like is the following device. 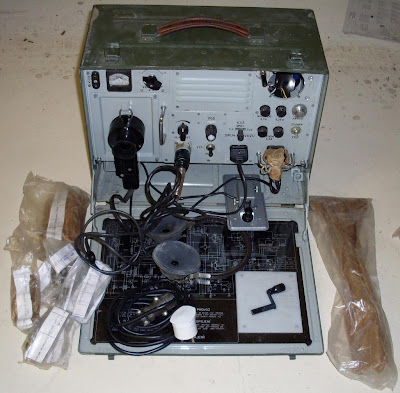 At first sight, this looked very very interesting, although, the Czech labels (now I know it's Czech) did not make any sense to me, this thing was bought. The 220/110V built-in supply made even sense for a lifeboat transceiver, since this box also contains an accumulator - actually the only word I could guess (AKUM.). And yes, there are emergency transceivers having A1A operation on 600m and A3H on 140m, so also the microphone made some sense.
Closer inspection revealed however, that the inside of the box holds a bell! And what about this little crank the can be mounted on the right sidewall of the housing?
Here's a closeup from the front: 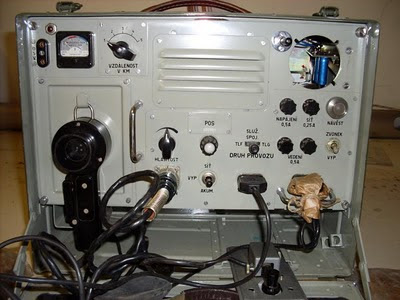 I like the way the Morse key is held in place, and next to it, a pen can be placed, ready for action.
All the stuff visible on the first photograph was actually in the compartment below the device.
The compartment where the microphone is located contained four accumulators. Maybe not the win of the year, but fun nevertheless.
Posted by Joachim Seibert at 7:12 PM