Running a grabber is somewhat fun, more for others, I guess. Firstly, it prevents me from transmitting on the band my grabber is operating on. Secondly, it blocks a receiver/transceiver that could be used for other purposes, in my case that would be my FT-817.

For the first problem, there is no obvious solution.
The second problem finds it's solution in a dedicated receiver.
Here it comes. We are talking 30m QRSS here. Signals will be seen at about 10140kHz. For grabbing this band, there is a very obvious and simple, even low element count, solution.
The basic idea here is, 5068.8kHz doubled results in 10137.6kHz. That is 2.4kHz lower than the visual-QRSS band. What would be the easiest way to double the LO-frequency?
Jan (PA9QV) made me aware of the so called "subharmonic mixer" as proposed by RA3AAE. The subharmonic mixer appears to be widely spread, however, not really well documented in the ham-radio world. For DC-receivers, the subharmonic mixer seems to have severe advantages.
Thus, a DC-RX using a 5068.8kHz canned oscillator in combination with a subharmonic mixer would do a fine job for a grabber, where the audio-frequency, as long as it can be decoded by a sound-card, does not play a major role.
Here is my first functional version of the concept: 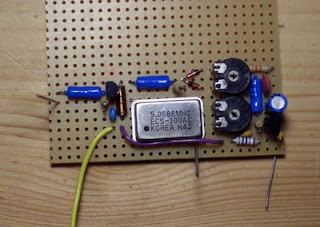 The setup is the following (left to right):
Preliminary result: PSK31 stations were heared instantaneously in crystal ear phones when the reveiver was hooked up to my rock-loop (indoors).
In the future this receiver will probably be provided with a 10140kHz filter either in front or behind the J310 front-end, this would reject the unwanted lower side band.
72!
Posted by Joachim Seibert at 11:10 PM