The "Target HF3/W", which is supposed to service me on the boat, offers switchable 12V supply via the antenna socket. Very nice, now for some active antenna to actually make use of the possibility.

Some research on the internet brought up a design by PA0RDT (pls search for it yourself). He call's the thing "mini whip". Some would call it an EH-antenne (haha, got you there), some others would call it an amplified E-probe. The latter it actually is. It is a capacitor probing the E-component of an RF-field.
However the design may be called, is it any good?
First to mention, there are many positive reports on this device. I had my doubts, but never the less, on a yacht, aerials are a compromise whatever one does. Thus, in particular inspired by the positive feedback found, I decided to give it a chance.
The key to the amplifier-circuit seems to be the 1MOhm resistor input network. I figure, 10MOhms would propably do a better job. However, not having 10MOhms-resistor in my stock, I went for 1MOhms. Which reduced my stock that much, that the next thing I'll do will be visiting my electronica-boer in order to buy said resistors.
Here comes the modification, unvoluntary, sort of... even though a 2N5109 seems widely available, it was not in my stock... I decided to replace it with a 2N918; this required to change the emitter-resistor to something higher-ohmic, in order to reduce Ic. I went for a conservative 470 Ohms. As for the DC-separating inductor, I went for what I found (whatever it was).
And this is, what I ended up with: 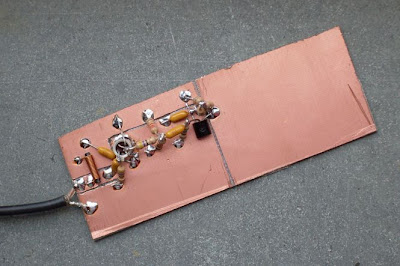 The result was pretty nice, although I tested indoors only. I am curious what this probe could do, when "flying" meters above my house's roof...
Should I ever build another one, that's what I would change:
Conclusion: The probe will have to prove itself, when hoist to the top of my ship's mast. Presently it appears to be a nice alternative to something more vulnerable, since, rugged it is!
Posted by Joachim Seibert at 11:07 PM