Finally found some time to document the exciter which I am not (yet) on air with. Oh, actually, I was on air with it, with a 1m cable attached to the output, receiving aerial 10m away; this was to see how stable the contraption is. Well, not stable enough for narrow-band QRSS, however, having seen PA3EGO's test yesterday - including some of the lessons learned on 80m - I don't think narrow-band is actually required when TXing A1A.
For regular CW the exciter should be more than enough... 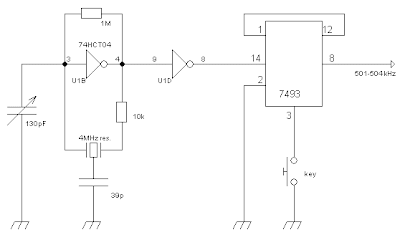 How it works
A 4016kHz signal is generated by a gate oscillator. A second gate is used for pulse-shaping the signal. Said signal, in the next stage, is divided by 8 using a 7493 ripple counter. The 7493 counter is provided with an enable NAND (pins 2 & 3), which allows for keying without changing the load on the oscillator IC. Further the counter is configure (pins 1 and 12 connected) to operate as 4-bit counter, in this way, output "D" (pin 11) could be used to drive a subharmonic receive mixer.
In Detail
The oscillator is using a 4MHz ceramic resonator with built-in capacitors (i.e. 3 pins). It is the very standard Pierce type gate oscillator, with the only difference that the reactance is influenced by two additional components. The 39pF capacitor at the "ground pin" of the resonator is supposed to reduce the capacitance of the resonators internal capacitors.
For illustration: The internals of the ceramic resonator look somewhat like that: 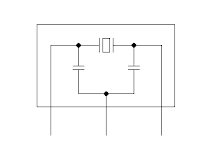 Usually, the center pin is directly connected to ground. This will spare the additional capacitors for a Pierce oscillator. However, the internal capacitors are such that the resonator will the resonating at about the nominal frequency, i.e. 4MHz. As the 600m band in PA is presently assigned from 501 to 504 kHz, the oscillator needs to be oscillating in the range between 4004 and 4032kHz, hence, the capacitive load on the resonator needs to be reduced. In comes a capacitor in series to the internal ones. Experimentation revealed a capacitance of 39pF for my setup.
OK leaving it with that, the oscillator in much to high. And in comes the variable capacitive load, which allow for smooth adjustment of the generated frequency.
The Future
The plan is to buffer the exciter with a 74HCT240 driver. Maybe the output of that would already good for local QSOs. In a further step, something that creates a little more punch will be required, maybe an IRF510...
The biggest problem to me now: How to get the RF in the aether?
Conclusion
I think this is the most minimalistic way of generating a relatively stable 600m signal, keying included... in particular with a parts count of 7 (!) - make that 10 for inclusion of a 78L05 with two blocking capacitors.
Posted by Joachim Seibert at 1:59 PM